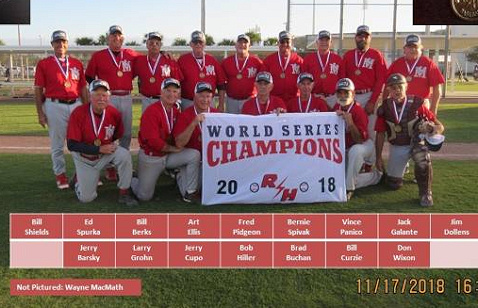 The Capital District Men’s Senior Baseball League, Inc. (CDMSBL) is a NYS registered non-profit, non-discriminatory corporation that provides adult baseball for players and umpires 18 years of age and older. We have four divisions (age brackets) 18+, 33+, 45+ and 55+. The skill level of our players range from former professional players to those who last played 20 years ago. But all have one thing in common – the desire to play baseball.

CDMSBL is a chapter of Men’s Senior Baseball League, (MSBL National, headquartered in Long Island, N.Y.). MSBL has chapters throughout the United States, Canada, Venezuela and Puerto Rico (over 325 leagues) with a membership of 45,000+ players. For more information about the MSBL, click on www.msblnational.com

The Albany-based chapter was established in 1989 with four teams in one division (30+). We now have 44 teams in four divisions with more than 600 members playing competitive baseball. Players in CDMSBL have played into their 70s. Our geographic focus is the Capital District, but we do have teams outside of the Albany area.

We try to obtain the best fields available in the Capital District. Some fields we have used or are using are Colonie Cook Park, New Scotland Town Park, Voorheesville High School's Satellite Field, Shuttleworth Park in Amsterdam, Dutchmen Field in Guilderland and the A, B and C Diamonds in Schenectady's Central Park.

CDMSBL is governed by a Board of Directors, which is an elected body voted upon annually by members. The Board of Directors oversees the operation of CDMSBL. The Board appoints a President, Secretary and Treasurer. Each division is run by a Commissioner, who is appointed annually by the General Managers within the division. The Commissioner manages the day-to-day operations of his division. Teams are run by General Managers/Managers. GMs are responsible for the full operation of their teams.

If you are interested in playing or umpiring, please contact us via email at johnreel55@gmail.com. Please send your name, address, phone number, date of birth, positions you prefer, lefty/righty, level of experience. Please do NOT use the Player Inquiry form. Your information will be posted in the free-agent listing on our Home Page of the CDMSBL.com Web site. You can also join the Web site and browse for contact information and to be sure your info has been published accurately. No phone calls please.